Two epic narcissists who see themselves as singularly suited to redeem America. 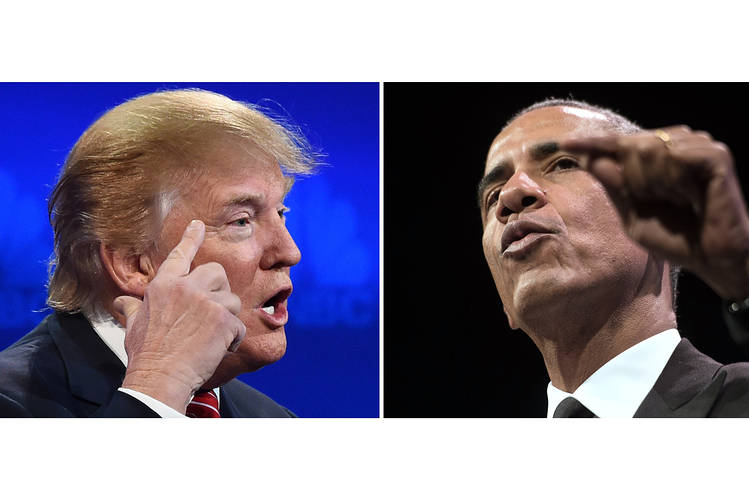 ENLARGE
PHOTO: AGENCE FRANCE-PRESSE/GETTY IMAGE
But leave smaller differences aside. The president and The Donald are two epic narcissists who see themselves as singularly suited to redeem an America that is not only imperfect but fundamentally broken. Both men revel in their disdain for the political system and the rules governing it. Both men see themselves not as politicians but as movement leaders. Both are prone to telling fairy tales about their lives and careers.
And both believe they are better than everyone else.
“I think I’m a better speech writer than my speech writers,” Mr. Obama told an aide in 2008. “I know more about policies on any particular issue than my policy directors. And I’ll tell you right now that I’m . . . a better political director than my director.” Compare that to Mr. Trump earlier this month, when asked on MSNBC who he turns to for foreign policy advice. “My primary consultant is myself.”
Historians may mark the early 21st century as the moment when Americans stopped seeking probity or at least predictability in their leaders and started shopping for ecstasy and transformation; a politics beyond words. Republicans mocked the grandiosity of Mr. Obama’s first run for the presidency—the Doric columns; the pledge to make the seas recede—but is that so different from the pompous iconography of the Trump jet or his manifestly absurd promises to get foreign countries to pay for his political boondoggles?
More to the point, Mr. Obama was a cult-of-personality candidate. His admirers projected on him whatever they wanted to see: passionate liberal; post-ideological pragmatist; philosopher king; cool cat. Politically, he was the equivalent of a non-falsifiable hypothesis. No evidence could disprove his rightness.
Mr. Trump inspires similar fancies among his supporters. Either he’s the Great Negotiator who will know how to bargain with Congress and cut better trade and security deals with the Saudis, Chinese, Europeans and so on. Or he’s the immovable man of principle who will remain unbowed when, for instance, troubles mount with his mass deportation of los ilegales.
Both interpretations can’t be true. But it’s in the nature of cult personalities that followers rarely ask hard questions because they are seeking leaders who square circles.
Non-American readers might also note the ways in which, on foreign policy, Mr. Trump is a magnification of Mr. Obama, rather than his opposite number. The president caused some consternation overseas when he complained, in a recent lengthy interview with the Atlantic’s Jeffrey Goldberg, that too many U.S. allies are “free riders” mooching off American security guarantees. “We don’t always have to be the ones who are up front,” the president explained. Leading from behind “was part of the anti-free rider campaign.”
Now take Mr. Trump. NATO, he told the New York Times last week, is “unfair” to the U.S., which pays “a disproportionate share” of the defense burden. The U.S.-Japan defense treaty is “not a fair deal.” Across the world, the U.S. is being “systematically ripped off.” On Ukraine, “I would agree with” the president that the country belongs in Russia’s sphere of influence. If Europeans won’t take the lead, Mr. Trump wonders, why should the U.S.?
Both men also share the conviction that the U.S. can’t afford much of a foreign policy anymore. Mr. Obama often faults the high cost of the war in Iraq for “constraining our ability to nation-build here at home.” Mr. Trump complains that “we’re defending the world” despite a national debt nearing $21 trillion.
One man wants to shrink America’s role in the world for the sake of a bigger state; the other man for the sake of shrinking the debt. In either case, the prescription is to put America in retreat. In neither case do they want to address the real driver of the U.S.’s long-term fiscal problems, which are entitlements and welfare (59% of the federal budget), not defense and international security (16%).
Which brings us to the most important way in which Mr. Trump is another version of the president: They both bend reality to suit their conveniences, and their conceits.
In Mr. Obama’s universe, terrorism is a nuisance, climate change is an apocalypse, and economic growth is an inequality problem. In Mr. Trump’s, immigrants are invaders, trade is theft and allies are millstones. For each species of rubbish there’s a sizable political constituency. Maybe it will be large enough to launch Mr. Trump to the White House.
There’s a tendency among pundits to offer high-toned explanations for why Mr. Trump has risen this far, despite political expectations and ordinary good sense. Many of those pundits performed similarly opportunistic services when Mr. Obama’s star was rising. We repeat our mistakes when we think we’re doing the opposite.
Write bstephens@wsj.com.