They call it the “dying room.” At a county nursing home in a small Midwest farming town there is a room most often filled with extra supplies like oxygen tanks, walkers and hoists. But almost every week a resident in his or her last days is wheeled in. Extra chairs are brought for relatives. The door is kept closed to give the family privacy, but you can almost feel the sadness when you walk past.

For a time I visited the nursing home once a week to play guitar and sing old-folk standards to Alzheimer’s residents. They were mostly women in every stage of banter, nap and laughter, who had formed a semicircle of wheelchairs and recliners. Music is a muscle memory that worked even after they no longer knew who and where they were. Those who had no reaction to other activities would suddenly come alive with toe tapping, clapping and, in the case of one resident, yodeling in perfect pitch to Patsy Montana’s classic “I Want to be a Cowboy’s Sweetheart.” 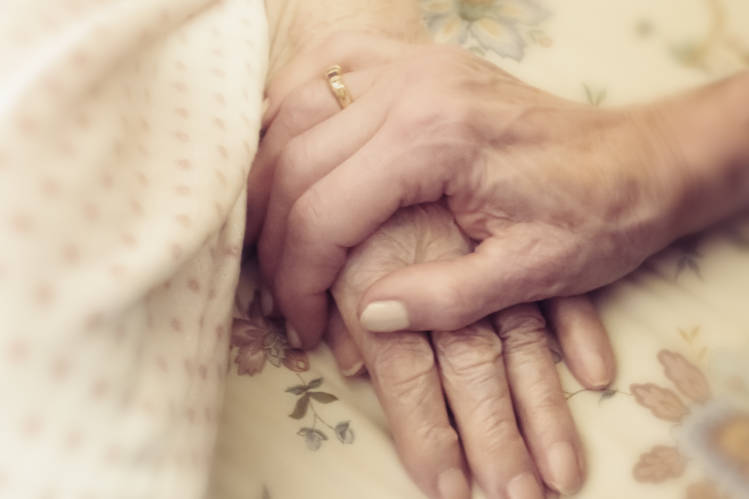 After one such session I had packed up my guitar and was walking by the dying room when the door opened. A woman poked out her head and asked if I would do her a favor. As it turned out I knew this woman, Margaret, a neighbor who lived three doors down the street from me. She was an only child and had never married. Her father had long since died. There was no one else left but her mother, who had been unresponsive for years. She was one of many residents who spent their days sitting in big chairs staring into space. Who knows what they were hearing, seeing and feeling?

Yet every day Margaret had dutifully visited the nursing home and helped feed her mother. She would hold her mother’s hand and quietly talk to her about her day. If there is a greater form of love I do not know what it is.

Margaret was not alone in that devotion. The nursing home had several men who came to the evening meals to feed their spouses. It was not unusual for some of them to continue to visit out of habit and loneliness after their wives had passed.

The favor that Margaret asked was this: Would I come into the room and sing “What a Wonderful World” for her mother? It’s one of mom’s favorites, she said.

I walked in, took out my guitar and placed the lyrics on the bed next to Margaret’s mother. She appeared as she always did: staring at the ceiling, mouth agape. There would be no toe tapping this time. But I was really playing the song for Margaret.

As I began it occurred to me that Louis Armstrong’s song isn’t about a sorrowful ending—it relates a beautiful future. This is perhaps the most disturbing part of grieving a loss or contemplating our own mortality: Life continues without our loved ones and, eventually, it races on without us, too.

I hear babies cry / I watch them grow / They’ll learn much more / Than I’ll ever know.

“It will happen to all of us,” Christopher Hitchens said after learning that he had terminal esophageal cancer, “that at some point, you get tapped on the shoulder and told not just that the party’s over, but slightly worse: The party’s going on, but you have to leave.”

Margaret’s mother died a few hours later. Given the burden of years of caring for a parent, and the fact that death wasn’t unexpected, I thought its final arrival might offer some sense of relief. The opposite occurred. Margaret was distraught for months, sadder than she had ever been. Though her mother had been unresponsive for all those years there was still the body with its beating heart, the soft hand to hold, the eyes to look into, and the presence to which to tell the stories.

Grieving took Margaret months. Work helped, as did exercise and the care and feeding of her two beloved dogs. I would greet her on my afternoon runs if she was in her yard. My wife, who knows the grief of losing a parent, would call on her occasionally, take her some food, listen patiently to her sorrow.

Margaret has never mentioned the moment that we shared in the dying room with her mother. But slowly she began to seem herself again. The next spring, on a particularly warm day filled with birdsong and blossoms, I was raking out the leaves from my flower bed when Margaret walked by with her two dogs. As her pets pulled on their leashes I called out a greeting: “Nice day for a walk.” She gave me a smile, the first one I had seen from her in months, and answered: “Yes, it’s a great day for doing just about anything.”

And I think to myself

What a wonderful world

Mr. Lyons’s most recent book is “Going Driftless: Life Lessons from the Heartland for Unraveling Times.”