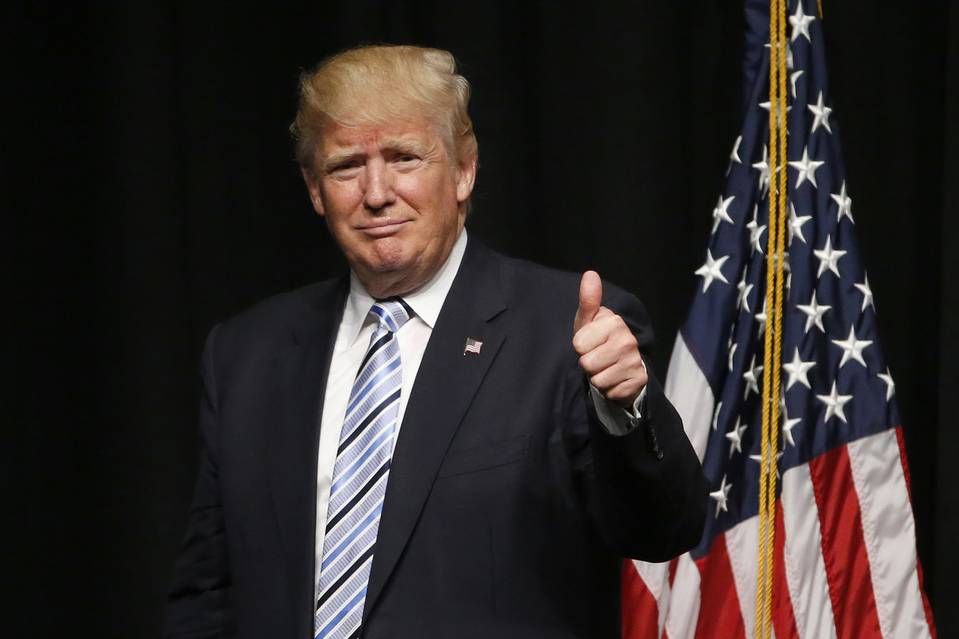 ENLARGE
After delivering an energy-policy speech in Bismarck, N.D., May 26. PHOTO: ASSOCIATED PRESS

Political markets are weird: They cry out for something and yet politicians, with their enslavement to conventional wisdom and careerist caution, are unwilling to supply it.

Then along comes Donald Trump.

Mr. Trump, in his set-piece energy speech on Thursday, did something that might outlast his presidential hopes. In his anti-intellectual way, he made an intellectual contribution. For decades, poorly justified scientific fears of future warming have hovered as an incubus over U.S. energy development. These fears, you’ll notice, have not actually blocked much of anything: Fracking happened. The U.S. continues to export coal to China. But these fears fill America’s leadership class with guilt and cognitive dissonance.

Give Mr. Trump credit for trying to break the spell.

In a speech the media has done its best to ignore or debunk, he said, “From an environmental standpoint, my priorities are very simple: clean air and clean water.” With these words, he relegated back to the land of abstraction the abstraction known as climate change.

His was a model political speech, one that Hillary Clinton might learn from. It set an agenda, with a minimum of windy rationalization, that voters can assess. Mr. Trump, as all politicians do, offered a prayer to the false deity of energy independence but he also offered a perfectly serviceable vision of Americans freely competing in global energy markets based on our own natural and (note) renewable resources and technology.

By now, it should be obvious that a succession of “fraudulent” (to borrow a word used by out-of-school climate activist James Hansen) agreements like Kyoto, Copenhagen and Paris are not paving the way for a non-fraudulent agreement to impose costly climate actions the public would never support.

The climate policy that actually gets enacted by now has a track record: It consists of ludicrous gestures and policies of cost-without-benefit like Tesla subsidies, whose driving force is the desire of influential pre-Trumpian elites for handouts.

As for the $100 billion spent on climate research, it has yielded one certainty: A human impact is hard to disentangle from a welter of natural variables.

What’s more, science can’t deny its nature forever. New information, based on actually measuring and understanding things like temperatures, emissions and cloud formation, is increasingly rewriting our hazy understanding of atmospheric processes. This data suggests our computer models have overstated the warming risk.

Also ripe to be revisited are the “business as usual” scenarios presumed by the climate alarmists, in which patterns of energy production and consumption don’t change in the absence of heroic government central planning efforts.

The emergence of fracking, which has played the major role in upending the U.S. coal industry, was not the product of climate policy.

The rise of the lithium-ion battery and explosion of battery-powered devices in our lives, of which even Tesla is but a flamboyant and overrated derivative, was not the product of climate policy.

Climate movement types, meanwhile, have increasingly turned to vilifying nonbelievers as a substitute for dealing sensibly with a possible human impact on climate. A minority movement is on its way to becoming a cult, increasingly anti-science. Know them by their talk of “saving” the planet: Even under the worst scenarios, global warming does not endanger the planet. It poses an inconvenience to human communities that have become accustomed to stacking their wealth at the water’s edge.

Perhaps it took Donald Trump fully to exploit the fish-in-a-barrel vulnerability of Democrats on climate. Democrats love citing a pending climate catastrophe but want to live in the land of the real politically, never taking ownership of policies actually commensurate with the alleged crisis. Al Gore, when he was running for president in 2000, wanted Bill Clinton to open the strategic reserve to keep gas prices low.

In his speech, Mr. Trump tweaked Hillary Clinton for promoting U.S fracking technology to China as secretary of state, then proposing to regulate fracking out of existence at home. He tweaked President Obama for seeking to block Canada’s energy exports by killing the Keystone pipeline even while enabling Iran to open its spigots.

Mr. Obama, proving again that he makes a better representative of the countries he visits than the one he comes from, said from Japan on Thursday that foreign leaders are “rattled” by the rise of Donald Trump.

Good grief. What endorsement could carry less weight with the American people? These are the same foreign leaders who’ve been marching America’s major allies into permanent decline, not least with massive renewable-energy subsidies that have produced no benefit for their societies. If anything survives as a monument to the great Trump boom of 2016, let’s hope it’s a turn toward realism on energy and climate.